Do you have an idea or invention in need of legal protection? Caseiro Burke is experienced in patent law and prosecution in a wide range of technical fields. Our patent attorney works collaboratively with clients to secure patent rights in the United States and throughout the world. Patent owners use their patents to receive licensing revenue, ward off infringers or both. Beyond the establishment of patent rights, Caseiro Burke assists clients in negotiating and documenting patent license agreements.  We also represent clients in the assertion or defense of patent infringement claims.

What is a patent? 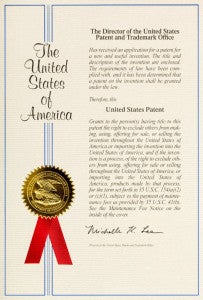 A patent is a government-granted right to exclude others from making, using, selling or importing an invention. The right is limited in time. A patent can be used as the basis of a patent infringement lawsuit. A patent is initially owned by the inventor or inventors. The owner may grant a license to make, use, or sell the invention. Ownership can be transferred by assignment.

A provisional patent application provides an applicant with one year of patent pending status. It does not result in the grant of a patent but can be an effective placeholder, establishing a date of application, which is important in determining the rightful owner of a patent, and in determining a date of relevant “prior art” used in the patentability analysis. Provisional applications are not examined by the United States Patent and Trademark Office (USPTO) and are less formal than non-provisional applications.

What is patent prosecution?

As you might expect, there is much time and effort associated with the process, which involves communicating with the patent examiner responsible for reviewing the application and, possibly, revising the description of the invention to distinguish it from previously existing technology.

What are the different types of patents?

There are three types of US patents: utility, design and plant, all of which are derived from the filing of a non-provisional application. Caseiro Burke assists clients in obtaining utility and design patents.

Utility patents comprise the vast majority of patents and cover any new, useful and non-obvious innovations; specifically, any new and useful process, machine, article of manufacture, or composition of matter, or any new and useful improvement thereof. The term of a granted US utility or plant patent is 20 years from the filing date.

Similar rights can be obtained in other countries as well. The UnitedStates is one of approximately 180 contracting countries included in an international treaty known as the Patent Cooperation Treaty (PCT). We can file PCT applications for our clients to start the process of obtaining patent rights in other countries. Caseiro Burke works with foreign agents to process PCT and foreign national applications.

Thank you for contacting us. We will get back to you shortly.

Please complete all required fields below.